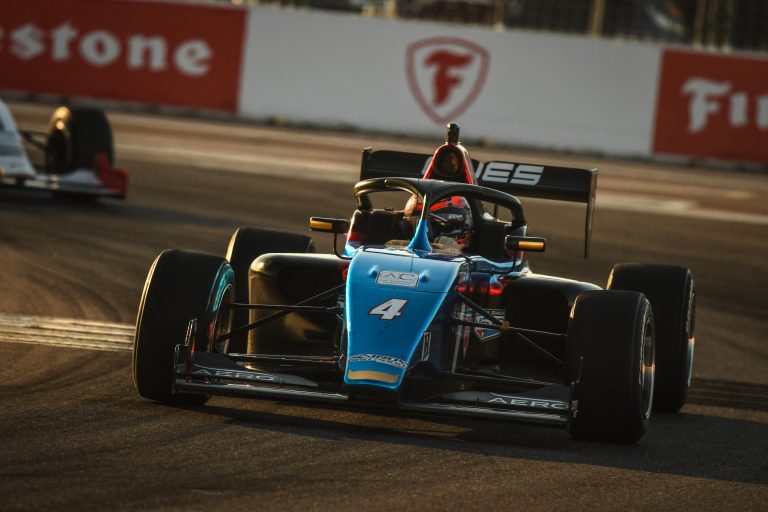 The 2022 campaign kicked off for Jay Howard Driver development this weekend as the team fielded six drivers at the Grand Prix of St. Petersburg, the first stop on this season’s Road To Indy schedule. In the Indy Pro 2000 Championship presented by Cooper Tires, Wyatt Brichacek returned for his second season in the series, while Braden Eves and open-wheel rookie Salvador De Alba joined the JHDD fold for this year.

With track time at a premium, the trio had only 30 minutes to get to grips with this year’s updated chassis before the weekend’s single qualifying session and two races. Eves, last season’s vice-champion, led the way into Race 1 for the team, starting from P5 on the grid, and was able to improve to fourth by the checkered flag. De Alba, the 2021 NASCAR Mexico Series champion, hit the ground running in his transition to single seater racing, scoring a top 10 finish on debut. Brichacek ran fast enough to qualify on the front row for Race 2, despite a 13th place finish.

In Race 2, Eves and Brichacek both spent time near the front of the field, with the pair challenging for a 1-2 at one point before settling in to finish third and fifth respectively. De Alba ran into trouble on lap 4 and wasn’t able to complete his race, bringing his promising opening weekend to a premature close. On the Cooper Tires USF2000 Championship side of the garage, the team saw three drivers debut in the series. New Jersey’s Yeoroo Lee and Mexico’s Jorge Garciarce kicked off their 2022 campaigns, while Nicaraguan Frederik Lund piloted the #6 car for the weekend. With such limited seat time before this weekend, the focus was on learning for all three drivers. The first race of the weekend saw them do just that, as all three improved on their starting positions. In Race 2, Garciarce and Lee methodically moved their way up through the field, with the Mexican scoring his first top 10 in open-wheel racing. Lund wasn’t able to complete the race due to a Turn 5 incident halfway through.

“I always love coming to St. Pete. It’s always exciting to start the season here, and it was a pretty good weekend for us,” said team owner Jay Howard. “In USF2000, all the guys are rookies and are all inexperienced. They got some valuable laps and continue to get faster and faster. The best laps were at the very end as we expected, and we go away with a top 10 in the end, so that was good. On the Indy Pro side of things, we had a good points weekend. Both Braden and Wyatt were running up front and were close to a 1-2 at one point, so positive there. For Salvador, he adapted to the car really well and he’ll keep getting better with more laps under his belt. Lots of positives, and we’ll move on to Barber.”

The Indy Pro 2000 and USF2000 championships return for Rounds 3 and 4 at Barber Motorsports Park in Birmingham, Alabama on April 29-May 1. Catch live streams on RoadToIndy.TV, the Road to Indy TV App and the series’ respective websites, indypro2000.com and usf2000.com. Find our official handle, @followJHDD, on social for news, updates and highlights. “We got a little bit unlucky in qualifying, but overall I think it was a really good weekend. We moved up in both races and actually made a move where I could’ve potentially gotten the lead in the second race, so really promising stuff. I’m happy with the way the team worked and the car. We had really good race pace, so overall it was a really good weekend and I’m looking forward to building on the momentum. We have some more testing before the next race, so I’m super happy overall.

“Obviously, I would’ve liked to win. I’ve always won here, so it’s a little bit disappointing not to win this weekend, but overall we’re looking at the way qualifying went the field was pretty scrambled up in both races. It’s really only me and another guy who had consistent finishes in both races, so I think that’s what we need to be focused on. We’re fighting for a championship here and I think it’s a good points weekend, so mission succeeded there.

“I really like Barber. It takes high commitment to be fast there, and I did really well there last year. It was actually my first race back since my crash and I was able to take the pole and the win there, so I was good there last year and Jay had a really good car there last year. It was really me vs Rasmussen there so I think it’ll be close and overall really I’m just happy with the way everything went smoothly, and we’ll see how the next weekend goes!”

“I thought it was overall a good weekend. We struggled a bit in qualifying, but after that we really showed that we have the pace to run up front. Qualifying second and finishing fifth isn’t really where we wanted to finish, but again that just proves that we belong in the first two rows and that podiums are going to come sooner rather than later.

“I think last year we were really unlucky, but also I just think that we’ve been putting it all together and working really hard in the offseason to improve my driving. I think that’s really improved over time, and with the experience I have now I think that as long as we put all the pieces together, we’ll be right there racing for podiums each race.

“Barber is probably my favorite track. It’s the track that I think I’m best at, so I’m really looking forward to it. I think here it was good to get used to running up front, and I think we’re going to be fighting for wins and hoping to run up front there as well.”

“It was my first time racing an open-wheel car and my first time on a street course. When we arrived here, we knew it was going to be a pretty hard race weekend with limited track time before the races. I watched a lot of videos because we didn’t have access to a sim [of St. Pete], and up until Race 2, I was happy with my pace and results. We all have a winning mentality, but we ended the first race with all four wheels, and that’s what counts there. In the second race, we started a little bit better. I think I had more pace, but I got hit from the back and had to retire. I’m happy with the pace we‘ve got, and we know what we have to improve, and that’s the good part. The downside is I got less laps than everyone else in St. Pete. It was a tough first weekend, but now we have everything to improve and nothing to lose, so we can have better weekends going forward.

“Even though I haven’t been in the car long, I felt confident going into the first race. Everyone is so respectful with the race lines, so it was pretty good. I was for sure intimidated by the open wheels because with what I’m used to racing, you can touch each other, and with this, if you touch each other, your race is done. And here at St. Pete it’s even more difficult to pass, but I felt confident. I think whenever you’re faster than the car in front, you will pass him, and whenever he is faster than you, you will get passed, so it’s not that complicated. For sure, I need to improve my pace, but my body feels good and I didn’t get tired during that race, so that’s another good thing. I think now, I need to put all the pieces together because I know how to do it. I had a very good optimal race time, but I couldn’t get a full lap together. I know what to improve, and we’ll work hard for the rest of the season.

“I’ve only done one practice session at Mid-Ohio, so everything is new for me. But I feel confident. I think I’m on the best team I could get. This is why we are here. Everyone wants to help and I want to improve, so that’s great. It’s a very big challenge to go to new tracks in a car I don’t know, but we’ll figure it out. It will be helpful to have a two day test at Barber before the race weekend, so that’s good for me. This year is to improve and get to know the tracks so that later in my career I can get good results. Like I said, the only track I know is Mid-Ohio, so it’s good that we have 2 races there. They say that Barber is a challenging track, and I hope that it goes well there!”

WHAT THE USF2000 DRIVERS SAID:

“The weekend was pretty good. I was improving throughout the whole weekend. In Race 1, I finished P14 from starting P16, and in Race 2, someone went into the wall at Turn 5 and I had nowhere to go and ended up T-boning him, which was unfortunate. The car felt good and the track was a little less bumpy than I thought it would be, so I felt learning it was easier than I had feared. I’m running Italian F4 this season, so it was great to get more experience in an open-wheel car!”

“It was my first weekend over here. Obviously it wasn’t the easiest weekend, as it was my first time in a street circuit and my first time driving this car in a race. It wasn’t easy at all. We only had a half an hour of practice before we had to qualify, so not a lot of time to learn the circuit and the car. We got a bit unlucky in the first race when we pitted for new tires so we could start higher in Race 2, but unfortunately there were yellow flags so we couldn’t get a fast lap before the end of the race. For Race 2, everything came a little bit better, and we managed to finish top 10. It’s not a bad result. Obviously we want to finish higher, but I think overall it wasn’t bad at all. I get good experience and I think for the next race we will be closer to the podium spots.

“This weekend was more or less what I expected going into it. There was obviously little stuff that I didn’t know, and I expected to have more overtakes but it was quite difficult to pass here. I didn’t expect to start with a rolling start. Where I have experience driving, we start with a standing start, so this was a new thing for me, but it was cool.

“I’m really excited for the next race at Barber. I think it’s gonna be a tough year because I’ve never been to any of the tracks we’re racing this year. It is difficult to learn the track and the car at the same time, but I think just doing laps will help me improve. We have a test before the race at Barber, unlike here at St. Pete, and because of that I think we’re gonna do well.”