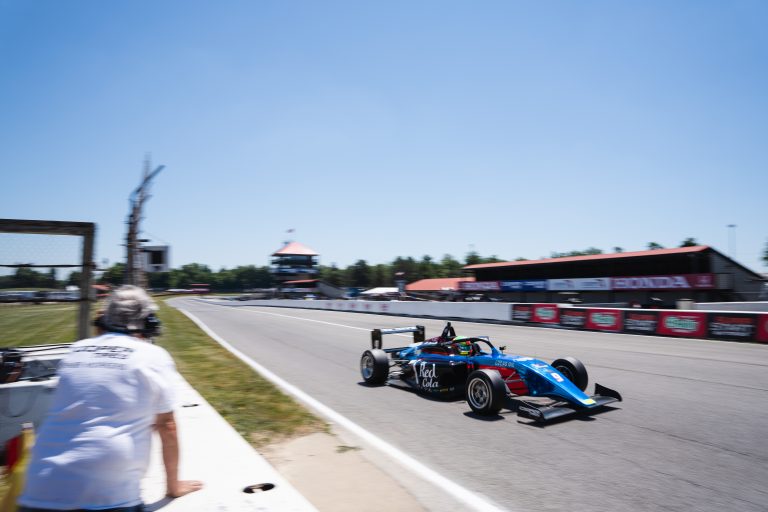 De Alba and Hughes Show Speed at Mid-Ohio for JHDD

Jay Howard Driver Development’s Indy Pro 2000 Presented by Cooper Tires and Cooper Tires USF2000 teams returned to action this past weekend at Mid-Ohio Sports Car Course, with Salavador De Alba and Lochie Hughes both securing promising results on their first visits to the track in their respective machinery.

Hughes, the young Australian and current US F4 Championship leader, was making his debut in the Cooper Tires USF2000 Championship. After missing out on a podium in Race 1 due to a minor technical infringement, he was able to back up his speed in Race 3 by securing a hard fought fourth place on his first ever Road to Indy weekend. Danny Dyszelski continued to show promise as he secured a top-ten finish in Race 1, while Jorge Garciarce showed tremendous progression as his lap times improved throughout the weekend. Evagoras Papasavvas, competing in only his second weekend after sustaining an injury before the start of the season, continues to impress as a 14-year-old rookie, and his raw speed will continue to be refined into results as the season progresses. On the Indy Pro 2000 side, Salvador De Alba’s rise to being a consistent front runner with the JHDD team continued, securing an electric second place finish in Race 1 and backing up his speed with a solid fifth place in Race 2. Braden Eves, also in championship contention, suffered some bad luck in first qualifying which compromised his opening race. Despite this, the local driver from Ohio was able to bag a set of eighth place finishes and will be looking to re-engage in the championship fight when the series resumes next week in Toronto. “It was a bit of a mixed-up weekend here at Mid-Ohio,” noted team owner Jay Howard. “Lochie was absolutely superb for us on his USF2000 debut, and it was good to see our package is as competitive as ever. Really excited to see what we can achieve for the rest of the season with our USF2000 boys. On the Indy Pro 2000 side, Salvador is showing he’s a real peddler and his progression continues to trend positively. Braden is still in the fight, and all eyes are on Toronto now. It will be a battle up there, but we will be ready.”

The Indy Pro 2000 and USF2000 championships return to action at the Honda Indy Toronto July 15-17. Catch live streams on RoadToIndy.TV, the Road to Indy TV App and the series’ respective websites, indypro2000.com and usf2000.com. Find @followJHDD on social for news, updates and highlights.