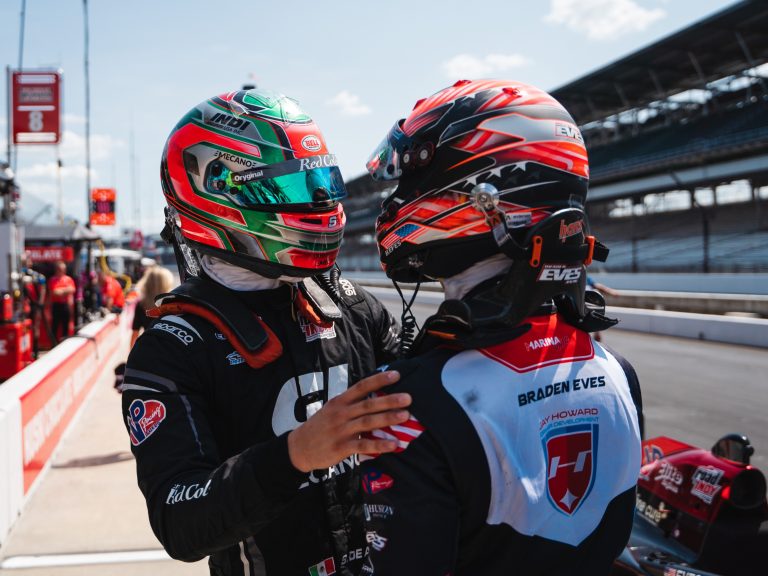 Fielding a season-high 7 cars this weekend at the Indianapolis Motor Speedway, Jay Howard Driver Development captured their first win of the year in the Indy Pro 2000 Championship presented by Cooper Tires while achieving season-best finishes in the Cooper Tires USF2000 Championship.

Just a year removed from a double victory in Indy Pro 2000 with Christian Rasmussen, the JHDD stable got off to a slow start in both series, with Braden Eves setting the pace for the team in qualifying by going tenth-fastest in Indy Pro 2000. On the USF2000 side of the garage, Danny Dyszelski went fastest of the JHDD cars to start the first race of the weekend in 20th position.

In what become a theme for the team in both categories, the USF2000 drivers parlayed strong race pace into improved positions early on. Led by George Garciarce, who started last, the young group of drivers worked their way through the field to record season best finishes, with Garciarce finishing seventh and debutant Frankie Mossman right behind in eighth. Dyszelski rounded out the JHDD finishers in 12th position, while Yeoroo Lee was unable to finish.

“On the USF200 front, we didn’t qualify great, but again we’ve got young rookies who’ve never been here,” expressed team owner Jay Howard. “We definitely made some progress with those guys this weekend, and like I’ve been saying, it’s just going to be a case of continuing to build with them throughout the year.” On the Indy Pro 2000 side of things, Eves and Salvador De Alba both showed pace and poise to avoid an incident in the treacherous first sector of the track, which helped them catapult themselves into the top 5 in the opening stages of Race 1. Wyatt Brichacek was caught up in the trouble, preventing him from making headway on the first lap, although he would recover to set the fastest lap of the race. From there, the leading pair worked their way to the front, with Eves eventually leading De Alba over the yard of bricks at the checkered flag in first and second position. However, Eves’ car failed post-race inspection due to a non-performance-enhancing technical infringement, meaning De Alba inherited the victory, the first in his burgeoning Road To Indy career.

“We’re so happy for Salvador that he’s gotten his first win,” beamed Howard. “Right from the moment he got in the car, we knew he was good, but it was all new to him. I didn’t think it would come that quick, to be honest. I was thinking it would take him until late in the summer to get to grips with the open wheel car considering his previous racing experience, but this result shows just how serious he is about his goal of making it to INDYCAR as well as a testament to the work the boys have been doing, team and driver.”

The team scored a second podium of the weekend in Race 3 as Eves validated his previous pace by finishing second, despite falling to eighth position at the start. Close behind, Brichacek put in the drive of the day from 12th place on the grid, climbing the scoring tower to finish a career-best fourth after a spirited battle for the final podium position. He also outpaced the entire field for the second time in three races, indicating the strides forward he’s taken this season.

“This weekend in particular, Wyatt’s really impressed us,” said Howard. “All along we’ve seen these little moments where he’d be really fast and go P1, but we’ve been working with him on making that pace consistent. His data has been textbook, his video has been great, but he’s just not had a lot of luck. He’s just got to keep doing what he’s doing, keep his head down, and he’ll be winning races very soon.” This weekend’s results mean that Eves leaves IMS in fourth place in the Driver’s Championship, while JHDD sits in second, just one point off the top in the team standings.

“It’s really disappointing to see that win taken from Braden, but we’re getting stronger and stronger, and Braden is getting more and more confident,” Howard said. “He told me yesterday that last year, he would’ve got his head down after a poor qualifying. This year, if we qualify poorly, he can put it behind him because he knows he drive to the front in this car. He has a level of confidence in us, we have high confidence in him, and we’re hungry. We’re going to keep working hard and giving our guys the chance to fight for wins, because we know they can bring the results when we give them the right tools. We’re so hungry for this championship, and this weekend just rattled the tiger cage.”

The team will be back in action at Lucas Oil Indianapolis Raceway Park in a little under two weeks to take part in the famed Carb Night Classic on May 26-27. Catch live streams on RoadToIndy.TV, the Road to Indy TV App and the series’ respective websites, indypro2000.com and usf2000.com. Find @followJHDD on social for news, updates and highlights.