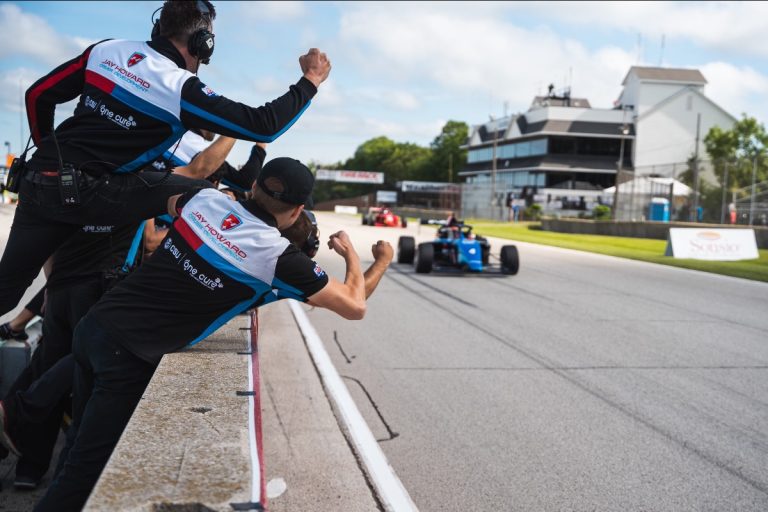 Eves and De Alba raced each other hard, each securing a top-five finish in Race 1, with De Alba leading them home in fourth position. In Race 2, it was Eves’ turn to lead the way, scoring his first win of the season from fourth on the grid. De Alba finished third, securing the first double podium on the Road To Indy in JHDD history. Eves’ brilliant drive places him fifth in the points standings with eight rounds remaining. In the Cooper Tires USF2000 Championship, Evagoras Papasavvas returned to action after missing a number of months due to injury. Teammates Danny Dyszelski and Jorge Garciarce each made progress with their qualifying pace, and all three drivers continued to learn and grow as they crossed the halfway point in their rookie seasons. “Overall, a very good weekend for the team,” said team owner Jay Howard. “The USF2000 boys qualified in the top 10. For Evagoras, it was his first time back in six months and having him place sixth in practice was very strong. It was a solid effort in qualifying on the Indy Pro side. We were hoping for a little better, but we knew we had really good race pace. The races didn’t go as planned on the USF2000 side of things, but they’ll bounce back stronger in Mid-Ohio. In Indy Pro, it was a super solid finish to the weekend with the double podium. We really needed that, as a team, and it makes a statement. Great drive from both boys, great execution by the team, we’re happy, and we move onto Mid-Ohio. With some of our competitors not having a great weekend, it tightens the championship battles up. The next few tracks are historically successful for us, and we need to keep our heads down and keep focusing on the next session. If we do that, the results will come.” The Indy Pro 2000 and USF2000 championships return to action at Mid-Ohio Sports Car Course on June 30-July 3. Catch live streams on RoadToIndy.TV, the Road to Indy TV App and the series’ respective websites, indypro2000.com and usf2000.com. Find @followJHDD on social for news, updates and highlights.