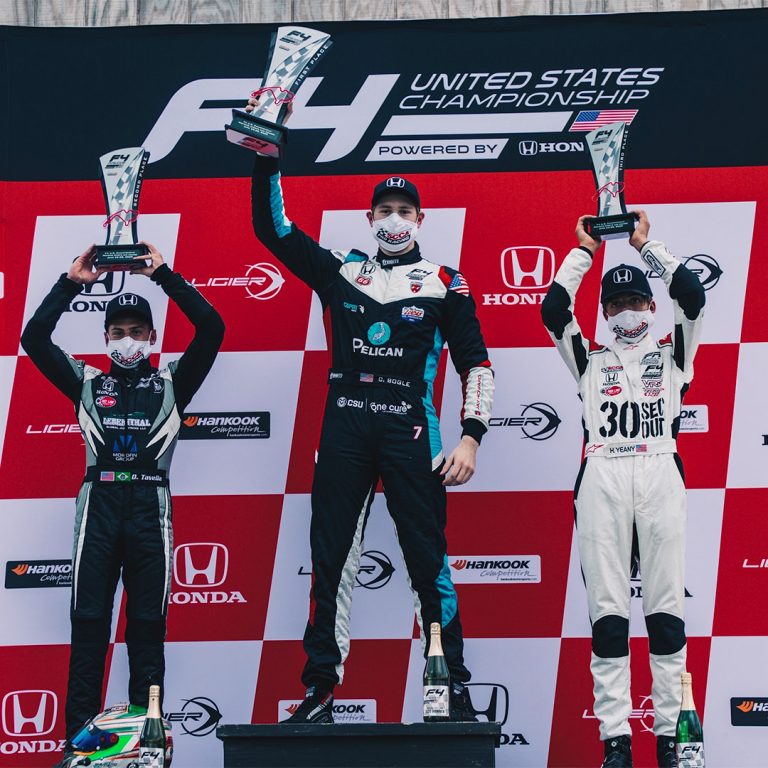 Antonio Serravalle, competing in his first Formula Regional Americas race with the team, secured a Top 10 finish in Round One on Saturday, before suffering an unfortunate spin on another car’s fluids in the early stages of Round Two on Sunday morning.

On the F4 US Championship side, the 6-car JHDD effort were at the mercy of the weather on Saturday afternoon and were unable to complete one full lap of green flag racing as a result.  With post-race penalties and assessments wreaking havoc with the results, all attentions turned to Sunday afternoon and Round Two of the championship.

Christian Bogle continued his fine form of late and was able to secure yet another win, now meaning he has taken the last four checkered flags in succession at F4 US Championship events.  Sam Paley enjoyed a fine run to come home fifth, just ahead of Nolan Siegel in Sixth.  Bijoy Garg also put in an impressive drive to secure eighth position, while Chase Hyland made up ten positions to secure P20.  Nick Persing, who had showed very impressive speed throughout the event, endured some gearbox issues as he crossed the line in P26.

Team-owner, Jay Howard, was naturally ecstatic with his team’s efforts after a whirlwind of a weekend.  “I’m so proud of everyone.  We’ve had some challenges thrown at us this weekend, but all of the drivers have stepped up to the plate and done themselves proud.  Christian (Bogle) continues to amaze me as he goes from strength-to-strength, and all of the other guys have shown amazing progress in the time we have been together.  It was also great to see Antonio (Serravalle) make the team’s debut in Formula Regional Americas, and I’m confident we will continue to move towards the front at the next event at VIR.”

F4 #3 Chase Hyland
Round 1 – N/A; Round 2 – P20
“My first weekend in a Formula 4 car went really well, I think. Race 1 didn’t go exactly the way I wanted it to. I got a really good start, but the conditions were tough in the rain. Race 2 went very well for me. I gained lots of experience in the car overall and I am having so much fun and I’m ready to run the next race!”

F4 #4 Nick Persing
Round 1 – N/A; Round 2 – P26
“First race was good; it was a rain race. I held myself together, managed to get around and finish. My second race didn’t go as planned, I was having some problems shifting down the back straight it was costing me so much time and I dropped down to about 12th position. I was trying to hang onto the position that I had and finish there, but I got taken out. It’s disappointing, but there’s so many races left in the season, you have to look forward to what’s next and push on.”

F4 #5 Sam Paley
Round 1 – N/A; Round 2 – P5
“Race 1 was disappointing, I only got four green corners so there’s not much to say. Race 2; I was off to a good start but I’m a little disappointed about my competitors and how they treated us as a team. We still ended up with a team win and a solid P5. Decently happy with the weekend.”

F4 #6 Bijoy Garg
Round 1 – N/A; Round 2 – P8
“Race 1, I thought was very good for us. Going P5 to P2 on the start was amazing and finishing P2 for my first ever race in Formula 4 US is very good. Race 2 was a bit less successful; I think there are things we have to look at both from my driving and from the set-up side. A less successful finish in P8 but overall, I think it was a good first weekend.”

F4 #7 Christian Bogle
Round 1 – N/A; Round 2 – P1
“The weekend got off to a really good start and I was very quick in practice and ended up taking pole in qualifying. Had a bit of an interesting race in Race 1, which ended up not counting for points or anything. I definitely had something to prove for Race 2 and I believe I did that.”

F4 #8 Nolan Siegel
Round 1 – N/A; Round 2 – P6
“My weekend at Mid-Ohio had a few ups and downs, overall. Our pace was really good, and the cars were good all weekend but unfortunately some things happened that were out of our control and it just wasn’t our day to make the podium. Overall, I’m happy and excited for the next race weekend.”

FRA #11 Antonio Serravalle
Round 1 – P10; Round 2 – P16
“Race 1, our pace was pretty good at the beginning and then at the end of the race we had a little issue with the tires and had understeer, so it was an okay Race 1. Race 2, we tried something different on the car and I didn’t like the driving style and it just made us go backwards. However, there was water on the track that spun me around. So, that was our race. At the end of the day, I am just learning and getting used to the car.”

Next up for the JHDD F4 US Championship and Formula Regional Americas outfits is a trip to Virginia International Raceway (VIR), July 17-19.  Fans can follow live coverage courtesy of FanRacingLive.com, along with updates via the Race Monitor App and JHDD social media channels.