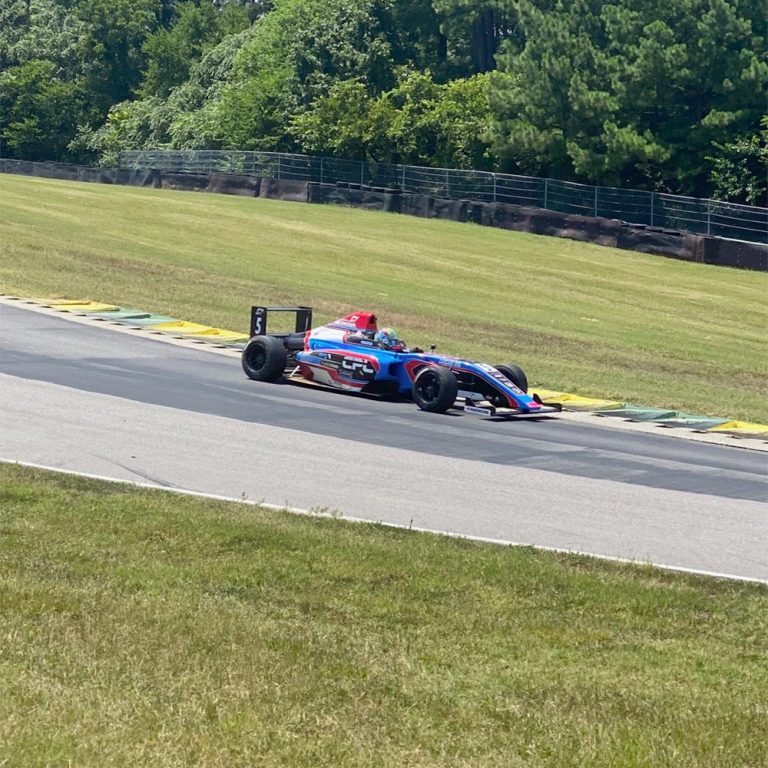 Jay Howard Driver Development (JHDD) returned to F4 US Championship action at a heat soaked VIR for Rounds 4, 5 and 6 of the 2020 Championship.

With Christian Bogle having decided to focus solely on his Road to Indy Presented by Cooper Tires responsibilities for the remainder of the 2020 season, the 5-car JHDD outfit represented by Chase Hyland, Nick Persing, Sam Paley, Bijoy Garg and Nolan Siegel did their best to maximize a weekend that was marred by red flags and caution periods.

In Round 4, Persing made some impressive moves during the limited time the race was green and was able to move up into P4.  Bijoy Garg, who had to start from pit lane, was one of the stars of the race and charged through to P16 with some superb maneuvers.

Round 5 on Sunday morning was once again dominated by caution periods, but both Garg and Siegel put in spectacular drives from the rear of the field, making up 32 positions between them.  Paley also put in an excellent drive to come home in P7, with Hyland and Persing also avoiding the carnage to take the checkered flag respectably.

Round 6 was held in sweltering conditions on Sunday afternoon, and with yet more full course yellows dominating proceedings, both Siegel and Hyland delivered strong opening laps to move up to P7 and P10 respectively.

Jay Howard was in reflective mood at the conclusion of the event and focusing on the positives from the second event of the championship. “I’m proud of the effort all of the boys put in this weekend.  It’s been a frustrating event in many respects, but the boys certainly did their utmost to maximize their opportunities, especially with Chase (Hyland) securing his first point of the season. We are looking forward to re-grouping and turning our full attentions to Barber at the end of the month.”

F4 #4 Nick Persing
Round 3 – P4; Round 4 – P11; Round 5 – P27
“Extremely happy with the first result this weekend. We had solid speed and I was able to prove my skills. The last two races were both filled with bad luck, but I still showed my skill as a driver.  Looking forward to Barber.”

F4 #6 Bijoy Garg
Round 3 – P16; Round 4 – P13; Round 5 – P23
“So obviously not the weekend we wanted to have. I mean, starting from the pit lane and starting from P25 really cost us. We made up around 40 positions this weekend, which I think was very good from the team. Obviously Race 3 didn’t go the way we wanted, but that’s racing, I guess. I’m looking forward to the next round.”

Next up for the JHDD F4 US Championship squad is a trip to the beautiful Barber Motorsports Park for Rounds 6, 7 and 8 of the 2020 schedule, July 31 – August 2.  Fans can follow live coverage courtesy of FanRacing.Live, along with updates via the Race Monitor App and JHDD social media channels.