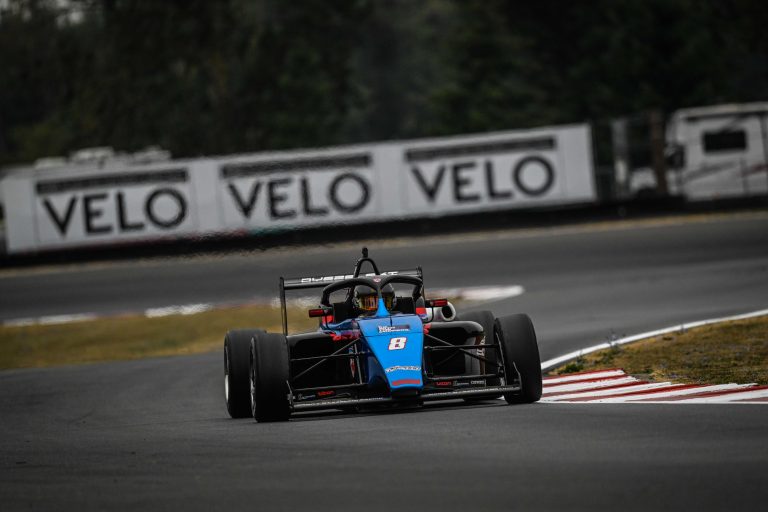 Jay Howard Driver Development’s young Cooper Tires USF2000 Championship stable led the way for the team at this weekend’s season finale at Portland International Raceway, with two of the three drivers scoring multiple top tens to punctuate their rookie campaigns. 16-year-old Marcos Flack carried the torch for the team in the Indy Pro 2000 Championship presented by Cooper Tires, going from last to an impressive P4 finish on his American road course debut.

After a day of testing on Thursday, the USF2000 side of the garage got to work in qualifying early Friday morning, with Mexican George Garciarce leading the way in P14. In Race 1, however, Garciarce and fellow rookie Danny Dyszelski navigated the carnage of the turn one chicane, maneuvering around the incidents in front of them to climb into the top ten. Dyszelski would go on to finish P6, an improvement of ten places over his starting position, with Garciarce two places behind. In Race 2 and 3, Garciarce, the series’ Hard Charger of 2022, would set the standard for the JHDD drivers, finishing in the top ten both times to finish the weekend with three total. Evagoras Papasavvas crossed the line twelfth in Race 3 to bring his truncated rookie year to a close. On the Indy Pro 2000 side, Flack’s Race 1 performance was the standout on the weekend. Mirroring his USF2000 counterparts, he used the chaos in turn one to catapult himself from fifteenth to inside the top five, where he would remain for the rest of the race. Salvador De Alba and Braden Eves would each make their way forward to make it three JHDD drivers in the top ten at the checkered flag. De Alba and Eves continued their runs, finishing tenth or below in all three races in Portland, completing a solid weekend for the team. De Alba would finish the weekend by claiming the Indy Pro Hard Charger award for 2022, joining Garciarce as the driver with the most overtakes in their respective series.

“It’s always nice to finish a year strong,” expressed team owner Jay Howard. “There’s a saying in racing that you’re only as good as your last race. For us we’ve had a great year with a lot of wins, some double podiums and we’ve done things that many other teams failed to do, so there’s a lot of positives throughout the year. You just want to try to end the year winning races, and we weren’t able to do that this weekend unfortunately.”

“For the USF2000 guys,” he continued, “I see this weekend as a win. In the last race we had all three cars in the top ten at one point, which is strong for having rookies. We’re probably the only team that had all rookies, so overall it was really good. Now, we don’t stop and will work this winter to improve and get ready for next season. For the Indy Pro guys, it was another successful year. It was always going to be tough to top what we did in 2021, but we’re always looking to improve every week, every day. I think, actually, as a team we were better this season. That showed with double podiums, fighting to win the team championship, and the fact that all of our drivers in Indy Pro were at the top of the time charts at some point this season. It was very good, and obviously I would’ve liked to see us clinch the team championship in the end, but we didn’t, so now we’ll regroup, improve, and come back swinging next year.”

With the 2022 Road to Indy season completed, the focus now turns to the F4 U.S. Championship powered by Honda, where JHDD driver Lochie Hughes leads the championship standings with just two weekends remaining. The team takes on the tricky circuit of Virginia International Raceway from Oct. 6-9, so be sure to be tuned into JHDD’s social channels to stay up to speed on how the team closes out the season!