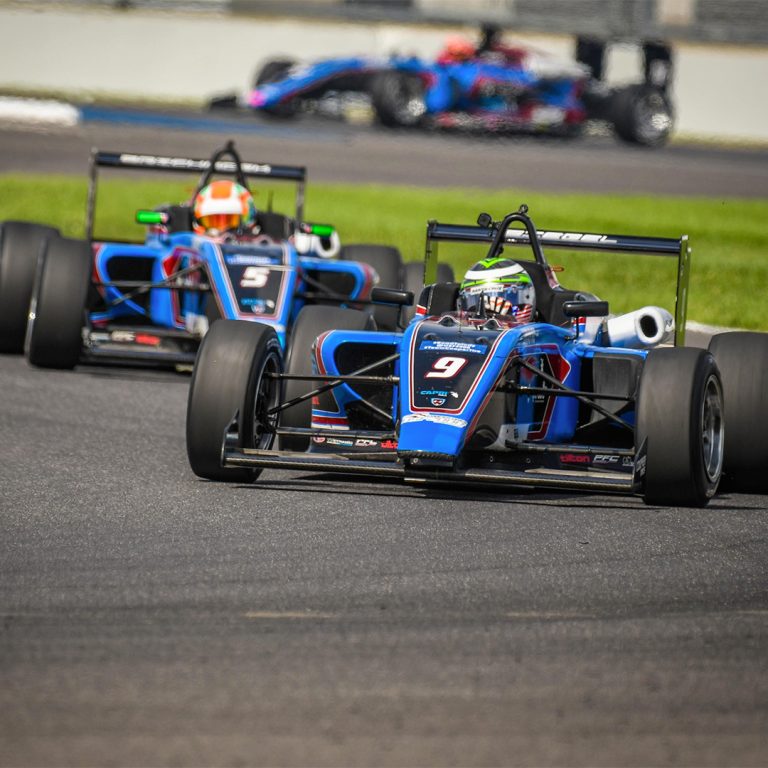 Over the course of the three races, notable results included a set of P5 finishes for Nolan Siegel and Christian Rasmussen, while Christian Bogle was able to make good progress through the field on all three occasions.  Wyatt Brichacek also showed solid progress upon recent events with two strong drives in Races 1 and 3, and Bijoy Garg continued his impressive acclimation to USF2000 competition with a solid drive to P11 in the final race of the event.

Despite a tough weekend for the team in terms of overall results, Rasmussen remains in the lead of the championship standings by 50 points, and team owner Jay Howard was keen to focus on the bigger picture.

“We’ve certainly had more competitive weekends in terms of results, but there are some positives to take note of,” the former INDYCAR driver noted. “Nolan had a great run to P5 in Race 1 and was always at the sharp end throughout the event. Bogle struggled in qualifying, but as he always does in the races, he charged forward. Wyatt also had a couple of very solid runs in Races 1 and 3, while Bijoy had a great run there in the final race.  A tough event for Christian (Rasmussen), but he still has a healthy championship lead and he’ll bounce back right away.”

#5 Wyatt Brichacek
Round 7 – P12; Round 8 – P17; Round 9 – P13
“Just finished up the weekend here at IMS. Not too bad of an event! We learned a lot. The team missed the set up by a little bit, so we struggled on that part. We managed to pick up a few positions each race; coming home with some decent points. We’ll be coming back ready for the next race.”

#6 Christian Rasmussen
Round 7 – P6; Round 8 – P5; Round 9 – P21
“A bit of a frustrating weekend here at IMS. I struggled with speed all week. The guys worked super hard, and it just got better and better. I think we really had a shot at it in the last race starting from P2, but unfortunately on the pace lap I got hit from behind. I had to come into the pits and get the car fixed. Frustrating, but we’re still leading the championship. Hopefully we can do better next time and bounce back from this weekend.”

#7 Christian Bogle
Round 7 – P14; Round 8 – P15; Round 9 – P15
“Just finished up the Indianapolis Motor Speedway Road Course event with USF2000. Ended up with three P15’s I believe. Definitely not a great weekend, but it’s still points all across the board. We’re looking to come back and get a strong run for the next event here hopefully soon.”

#9 Nolan Siegel
Round 7 – P5; Round 8 – P8; Round 9 – P20
“I had strong pace all week and ended up with a top five and a top ten for the first two races. Unfortunately, a few things happened in race 3, and it made it a disappointing end to an overall good event. I’m excited to get back at it at the next event here shortly.”

#18 Bijoy Garg
Round 7 – P13; Round 8 – P19; Round 9 – P11
“Hard weekend at the Indy GP Road Course. Having no time on the track before the weekend didn’t help things. I got up to speed quickly, but we were hampered by issues with the set up and my inexperience. We’ll try to come back strong at the next event.”

Further schedule updates are expected to be announced shortly, but as things stand, the next scheduled event is a triple header at New Jersey Motorsports Park, October 9-11. Fans can follow all of the action live through Road to Indy TV.