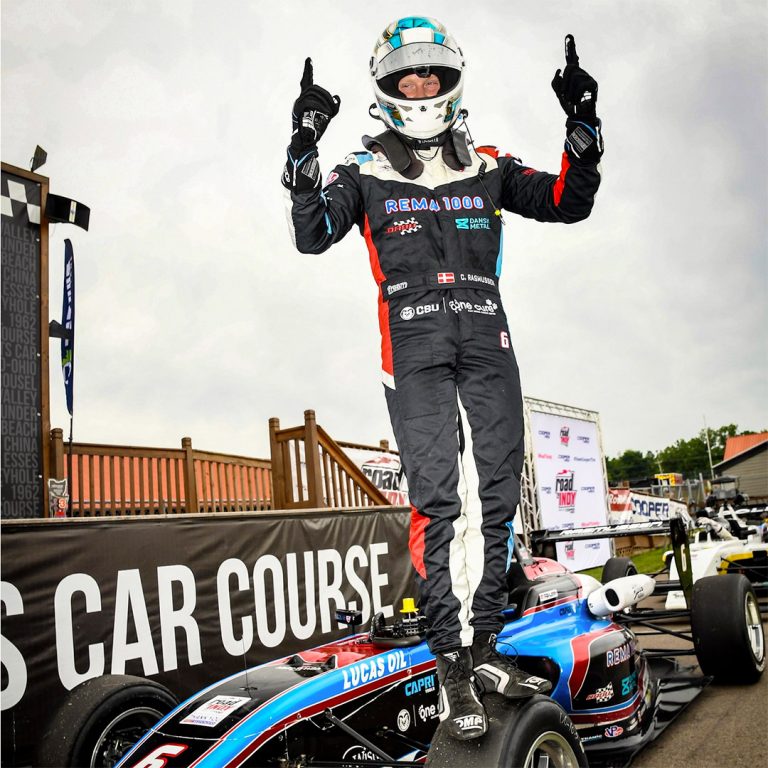 Rasmussen and JHDD Continue to Dominate at Mid-Ohio

While Rasmussen was inch perfect throughout all three races of the event, Nolan Siegel also continued to show promising progress and was able to capture his first Road to Indy podium in Round 4 thanks to a fine drive to third.

Bijoy Garg, competing in his second USF2000 event of his career, scored two very promising top 10 results in Rounds 3 and 5, while Christian Bogle showed top 10 pace throughout the event, running as high as P7 in the first race of the event prior to becoming entangled in an unfortunate racing incident.  Wyatt Brichacek also endured a frustrating visit to the Mid-Ohio Sports Car Course with gearbox trouble but was finally able to show his known speed and potential in the final race of the event with a solid run to P12.

Team owner Jay Howard was absolutely delighted with the effort put in by all of the team members and the drivers, and he is already looking forward to returning to the same venue next weekend. “What an outstanding effort that was from everyone on the team, I couldn’t be happier.  Christian (Rasmussen) was once again sensational and fully deserves all of the success coming his way.  Nolan finally got some reward for all of the speed he has been showing, and I am looking forward to seeing how he progresses throughout the rest of the season. Bijoy had a fantastic event as well, and his two top 10’s are just reward for all of the work he is putting into his craft.  Christian (Bogle) had a frustrating weekend, but similar to Wyatt, the results just don’t reflect the speed they had. I have no doubts they will both bounce back strongly next weekend.  Again, a big thanks to all of the boys who are working so hard.”

#5 Wyatt Brichacek
Round 3 – P12; Round 4 – P20; Round 5 – P12
“I started off strong in practice, struggled in the first two qualifying and first two races. We found an issue in the gearbox, but luckily the great team of mechanics got us out for the third race just in time. We realized we fixed the issue, so we’ll be stronger for the next Mid-Ohio event here next weekend. In race three, it definitely went better than the last two. Found some pace and made up a few positions.”

#6 Christian Rasmussen
Round 3 – P1; Round 4 – P1; Round 5 – P1
“Very good weekend for me at Mid-Ohio. I couldn’t have really dreamed of a better weekend. We won all three races, two pole positions, and a third place in the first qualifying. I’m really, really stoked and very happy with the team and how they performed. I’m happy with my own performance as well and looking forward to the next race. We’re going to go back and do our prep, do everything we can to come back here even stronger and continue the momentum. That’s five wins in a row now, so I’m trying to keep that going.”

#7 Christian Bogle
Round 3 – P19; Round 4 – P14; Round 5 – P13
“First weekend here at Mid-Ohio. I had a decent start in Race 1, ended up towards the back of the field, but definitely had a very good start to race 1. I ended up going all the way up to P9 but had a bit of contact that ended my race. Unfortunate, but second qualifying went well and I had moved back towards the front for Race 2.  Lost quite a bit of pace in Race 2, just my mistake for the driving. As for Race 3, I definitely made up some pace, and overall, looking forward to coming here again next weekend.”

#9 Nolan Siegel
Round 3 – P18; Round 4 – P3; Round 5 – P14
“My weekend overall went really well, and I got my first Road to Indy podium in Race 2. The other races didn’t go quite as I wanted them to, but overall the pace was really good, so we’ll see what we can do next weekend.”

Next up for the JHDD Cooper Tires USF2000 team is another triple header at Mid-Ohio Sports Car Course, this time in support of the NTT INDYCAR Series, August 7-9.  Fans can follow all of the action from Rounds 6, 7 and 8 live through Road to Indy TV.