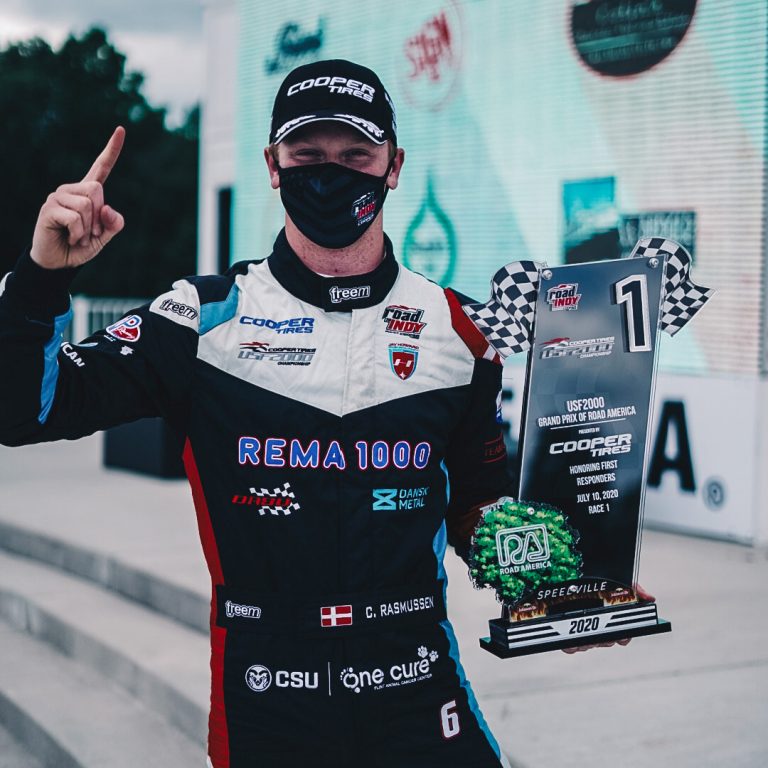 With a condensed two-day schedule that also saw a combination of extreme heat and thunderstorms, the drivers and the team had little room for error as they navigated the ever-changing conditions.

In the end, it was Rasmussen who swept the entire weekend, with two pole positions, two fastest laps and two race wins.  Christian Bogle also enjoyed arguably his strongest weekend of his Road to Indy career with two Top 10 finishes, with Wyatt Brichacek also showing very promising speed yet again in USF2000 machinery.

Nolan Siegel fought back superbly in Race 2 after an unfortunate opening lap incident in Race 1, and Bijoy Garg also enjoyed his Road to Indy debut with two solid drives across Saturday’s two races.

Team owner Jay Howard was naturally delighted with the way his drivers, and his team, started the season. “What a way to start the USF2000 season for JHDD.  (Christian) Rasmussen was a man on a mission and made his championship intentions clear.  Christian (Bogle) showed just how much progress he has made since last season and I’m glad he has got some evidence now to show for it.  Both Wyatt (Brichacek) and Nolan (Siegel) also showed very promising speed and I have no doubts they are going to be seeing results here soon.  Bijoy (Garg) also did a great job on his first Road to Indy weekend, and going back to Mid-Ohio will be good for him.  I really can’t say enough about all of the effort the boys on the team put in as well.  It really is a great way to start the season for the JHDD squad, and we look forward to Mid-Ohio with confidence.”

#5 Wyatt Brichacek
Round 1 – P16; Round 2 – P17
“The weekend started off good. We had good pace all throughout the Test Sessions and Practice. We were positioned P6 and P7 and then mistakes and bad luck in the Races cost us a lot of positions both times, finishing in the back. Overall, just not a great weekend.”

#6 Christian Rasmussen
Round 1 – P1; Round 2 – P1
“Road America went very good! Best weekend for me in a while! I think that the long off season has been good for me, I’ve been able to do all my prep work back home; working out, doing all the things I’m supposed to do. I think I found a good routine before I came here and I think that’s what was showcased here. I think I found my way around things and I hope to keep up this momentum for the rest of the season.”

#7 Christian Bogle
Round 1 – P6; Round 2 – P9
“Coming into Road America, I had some pretty positive thoughts. Definitely wanted to improve upon last year – which was a pretty bad year. First test session ended up improving quite a bit then in the second test session, I shorted the gap even more. I fell back during Qualifying but definitely made up positions in Race 1. I made it all the way from P14 to P6. I started seventh for the Second Race and made it all the way to P5 chasing down some of the front runners, had some pretty great battles! I ended up falling back from a mistake in the last corner and went all the way back to P9. Overall, I’m happy with two top ten finishes and a pretty good weekend.”

#9 Nolan Siegel
Round 1 – P20; Round 2 – P14
“My weekend had a few ups and downs, we had good pace, but unfortunately in both the Races, some unfortunate things happened so we didn’t get the result we wanted.”

#18 Bijoy Garg
Round 1 – P11; Round 2 – P15
“I thought it went pretty well for my first USF2000 weekend, especially with so little time spent in the car. I think the pace was there to do a bit better, but circumstances beyond my control prevented that from happening. Mid-Ohio should be a bit better; I’m looking forward to that.”

Next up for the JHDD Cooper Tires USF2000 team is a triple header at Mid-Ohio Sports Car Course, July 29-30.  Fans can follow all of the action from Rounds 3, 4 and 5 live through Road to Indy TV.