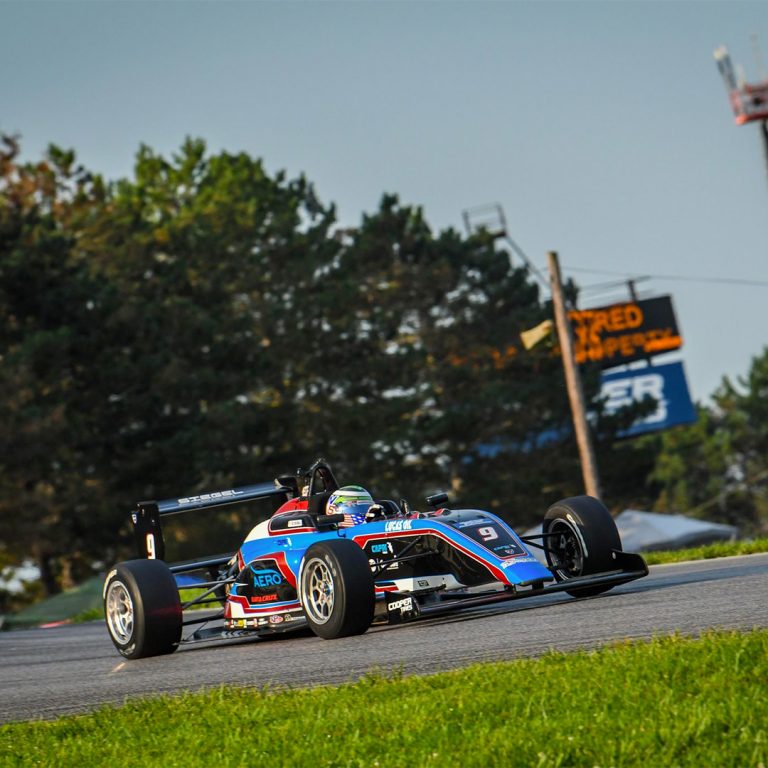 Rasmussen and Siegel Back on the Podium at Mid-Ohio

Notable results for the team included a return to the podium for Nolan Siegel in Race 1 with a fine drive to P3, while Christian Rasmussen sat on the pole for Races 1 and 3, as well as securing his seventh victory of the season during Race 3.  Christian Bogle continued to demonstrate his excellent race craft with drives through the field to secure two P11 finishes, and Wyatt Brichacek also showed tremendous fight with some exciting battles in the midfield throughout all three races.

With the variable conditions proving to be a major factor throughout the weekend, it was a case of maximizing the opportunities for all four JHDD drivers, something which team owner Jay Howard was keen to point out.

“It was a pretty wild weekend for us as a team, with lots of competitive action out on the track and some typical fall weather that is for sure,” commented Howard. “Christian (Rasmussen) had some ups and downs but showed his pace with two poles and a win there at the end. Nolan (Siegel) continues to go from strength to strength, and another podium is the least he deserves. I was also impressed with his recovery drive in Race 2. (Christian) Bogle was outstanding once again in race trim, and we will be working hard to maximize his qualifying at New Jersey and St Pete. Also, good to see Wyatt (Brichacek) was in the thick of the action in the midfield, and he is certainly making progress in his rookie USF2000 season. Big thanks to all the boys for all of their efforts this weekend, and looking forward to one last big push for the final two events of the season.”

#5 Wyatt Brichacek
Round 10 – P12; Round 11 – P14; Round 12 – P14
“Just finished up the weekend here at Mid-Ohio Sports Car Course. Three decent rounds, came home with some pretty good results and good points. Overall, a pretty decent weekend. Definitely some good battles in the mid-field, but we’ll work our way up to the front for the next weekend.”

#6 Christian Rasmussen
Round 10– P14; Round 11 – P20; Round 12 – P1
“Finished up Mid-Ohio here. Not the weekend we hoped for but managed to pull off a win at the end. I think we had the speed all weekend, but just wasn’t able to show it in the first couple of races. I’m happy I could give a win to the team. We’ve been behind for the last couple of races, both here and also at IMS. Great to be back on top and now we’re just looking forward to New Jersey Motorsports Park. Hopefully we can continue extending the points lead there.”

#7 Christian Bogle
Round 10 – P11; Round 11 – P13; Round 12 – P15
“Coming into the second race weekend of the year here at Mid-Ohio. Had some high hopes coming in and ended up with two P11 finishes at the end of the day and a P13. Fairly good race weekend, showing some pace all throughout the event. Overall pretty happy where I ended up. Definitely felt like I could’ve had a little more pace out of the car. A good weekend, and let’s move on to New Jersey and see what we can do there.”

#9 Nolan Siegel
Round 10 – P3; Round 11 – P9; Round 12 – P19
“Just finished up Race 3 here at Mid-Ohio. It didn’t go the way I wanted it to. I unfortunately got a puncture pretty early on and went a lap down after coming in to change that tire. Really unfortunate after a great weekend where I scored my second RTI podium. We’ll get them next time at New Jersey.”

Next up for the JHDD Cooper Tires USF2000 team is a triple header on the road course at New Jersey Motorsports Park, October 9-11.  Fans can follow all of the action from Rounds 13, 14 and 15 live through Road to Indy TV.