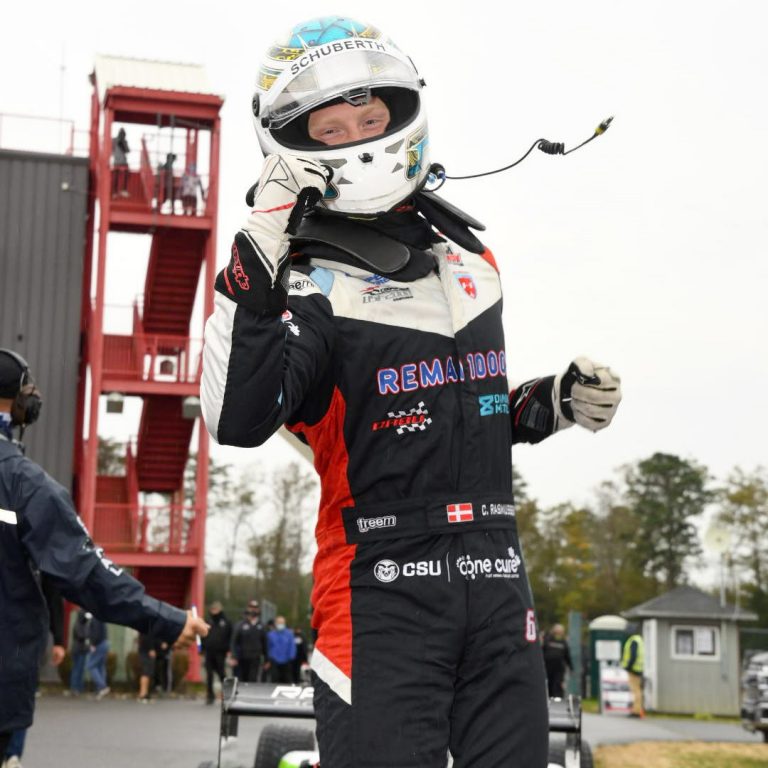 Along with the championship title, Rasmussen claims a scholarship prize valued at $313,800 which will allow the Danish driver to further his career on the Road to Indy ladder system in 2021.

The triple header race event on the fast and flowing New Jersey Motorsports Park track was an overall successful outing for the JHDD team, with Rasmussen claiming two wins and a second-place finish, while Christian Bogle secured a fine P8 in Round 15 in wet conditions.

Nolan Siegel claimed his first pole position of his Road to Indy career for Round 15 and was in command throughout the early exchanges on the damp track while on slicks. Unfortunately, the ever-improving young California driver had the misfortune of being the leader in ever changing wet conditions whilst on slicks. As the rain started to come down harder and being the first driver into turn six where the rain had fallen heavily, Nolan was an innocent victim of the tricky conditions, sliding off the track and ending his day with gearbox damage.

Wyatt Brichacek was also enjoying a fine drive in the final race of the weekend, running as high as fifth in the damp conditions. However, contact with another competitor brought an early end to his spirited drive.

In what has proved to be a year full of highs, excitement and challenges, the JHDD team can now look forward to the final Road to Indy event of the year on the streets of St Petersburg, Fla.  Team owner Jay Howard was ecstatic with his team’s efforts in New Jersey, but is already focused on finishing the season in style on the popular street circuit.

“What a day for Christian (Rasmussen) and the team, we’ve done it!” exclaimed a jubilant Howard. “Razz has worked his socks off all year and to clinch the championship here this weekend with another two wins is sensational. The boys have all put in the effort as well, so a huge congratulations to them as well. This is a team success that’s for sure! I must also say well done to all the other drivers. Nolan was excellent today, claiming pole and leading the race commandingly in tricky conditions before his unfortunate issue. Both Bogle and Wyatt also enjoyed very strong runs in the wet today, so I’ve been really happy with all of their performances this weekend.”

#5 Wyatt Brichacek
Round 13 – P14; Round 14 – P15; Round 15 – P16
“Just finished up the weekend here at New Jersey Motorsports Park. Really unlucky weekend for us. All weekend we were plagued with engine issues, which caused us to have less straight-line speeds than others. The first race wasn’t bad, the second race I was taken out, and the third race with mixed conditions I made my way from P17 to P5. Fought my way for a podium, and then got taken out in the third race as well. Overall, pretty disappointing weekend. The pace is there, and hopefully we can make up for it at St. Pete.”

#6 Christian Rasmussen
Round 13– P2; Round 14 – P1; Round 15 – P1
“What an awesome year it has been. I can finally call myself “USF200 Champion” and winner of the scholarship for 2021 to go to Indy Pro. It’s been an awesome weekend. We got second place yesterday, and a first place and pole position earlier today. The last race was a bit tricky with the rain coming in, but still showed that we are able to drive in the rain and in the dry, and we can do it fast. Great year, I’m very proud of the guys at Jay Howard Driver Development. They have been doing an awesome job all year. Thank you to my family, Dad, Mom, brother, all my friends at home for supporting me and everyone that has been a part of this journey. Without all of them, I wouldn’t be where I am today. Deeply, thank you!”

#9 Nolan Siegel
Round 13 – P9; Round 14 – P18; Round 15 – P18
“Unfortunately, the gearbox broke in the middle of race 3 from the lead, after starting on pole for the first time. Really, really disappointed but our pace was good, and I had a bit of a gap. Sometimes, it just goes like that. We’ll get them next time at St. Pete. Hopefully we can get that win.”

Next up is the double header season finale on the Streets of St Petersburg, October 23 – 25. Fans can follow all of the action from Rounds 16 and 17 live through Road to Indy TV.